A great start to February!

Our first week of February was quite interesting. If you have seen the February Calendar Corral, you know that February is going to fly by with all of the events we have planned! 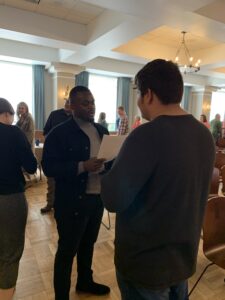 LSUHS Students at the February Real Local RVA meeting talking to a local chef from the guest panel.

The first Monday of each month begins with the Real Local RVA monthly meeting. This is grassroots group of independent, small grocery stores, farmers, farmer’s markets, value added producers, restaurants, and supporters working to build a more collaborative local food system. They have engaging speakers, panels, farm tours, and more. This month, we heard from a “farm to table panel” featuring local chef’s and farmers who sell to restaurants. It was moderated by Robey Martin, Cohost of Eat It Virginia on CBS6. Links to the farmers and Robey are under resources below. What was super cool about this meeting, is that it was a first for our newest student, who, as it turns out, has a passion for cooking. We are always excited to find a student’s passion and help them connect with it.

Tuesday began unexpectedly with an impromptu visit to Gilles Creek Park in near Richmond’s Shockoe Bottom and directly across from the Stone Brewery. We discovered this park accidentally one morning when we navigated through town to run a school errand after our normal morning pickup. We quickly decided to come back and explore it further when we had the time. Two things about the park stood out immediately and beckoned us. First, it had a BMX course and secondly, there were goats! We are all about the goats. LOL. So, today, after pickup, we headed right over to the park. Gilles Park has a tremendous amount of potential. It features both paved and dirt BMX courses, horseshoes pits and disc golf course. According to their website, Richmond City intends “to develop the park to connect a series of new and existing parks in an unprecedented urban greenway that will link Richmond neighborhoods to the nearby riverfront, Tobacco Row, the Capital Trail and the restored canal.” What a fabulous idea! We have added this park to our list of places to put in volunteer hours. We’ll post more of this story as it develops!

After arriving at school and having lunch, students jumped right into the normal routine. We conducted our writing class by reviewing last week’s writing assignments and moving on with a segment on using keywords and iconic notes to re-write an existing paragraph. Students are learning to put things in their own words as well as employing previously explored skills of dressing their work up with strong adjectives.

Our Intro to Graphic Design class focused on learning more of the photoshop tools and playing with layers. Students will create an advertisement using photos of their choice, layers and text for this week’s assignment.

Wednesday was a totally normal farm school day with the added fun of intermittent rain during chore time. Our goat taming is coming around with all the attention the students give them! We added more “classes” into the regime, picking up a typing class, adding individualized maths for each student, and officially launching the environmental science course for this semester. Our environmental science course is based on the National Geographic One Strange Rock curriculum. This film series and curriculum focus on our air and soil, two of the most important components of our current climate change conversation. We will use the information learned in this series to launch into further studies and discussions about our land and air uses and impacts, including farming and food production.

We had planned to have a tour of Liberty University in Lynchburg and enjoy some snow tubing on Thursday, but Mother Nature had something else in store. With the threat of pounding rain and promised flooding, we opted to reschedule the tour and stayed local instead.

As purchasing is part of any normal business activity, including farming, our students are included in farm and school purchasing decisions and errands. Thursday was no exception. With a shopping list, we headed right from our normal Shockoe Bottom student pickup to the Petersburg Tractor Supply. We chose this store because it is one of the few places left with good quality hay bales for sale. Students evaluated minerals and feeds for nutritional content and chose what was needed on our list. Afterward, we went to the closest grocery store, which happened to be the Ft. Lee Commissary, and purchase items for this afternoon’s culinary class.

Back at the farm/school, feed and hay were offloaded and chores done in a fairly steady rain. While attempting to deliver some feeds to the lower barn area, I managed to get the minivan completely mired down in the ever-deepening mud. The students came to the rescue and devised a plan to free the van while I fetched our farm truck to help pull it out. Their first attempt did not work. The second attempt worked beautifully! We used a different, higher path to return to the school where we enjoyed warming and drying by the wood stove! After lunch, we had our culinary class. Students prepared and baked 2 banana cakes and a huge bowl of Chicken Parm Bites. Our Culinary class occurs most Thursday afternoons and is open to the community for $15/class. 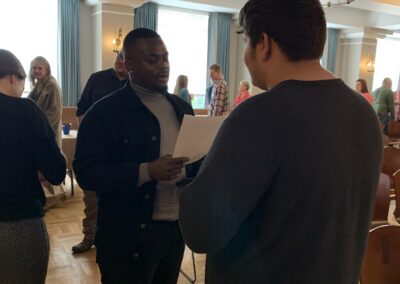 LSUHS Students at the February Real Local RVA meeting talking to a local chef from the guest panel. 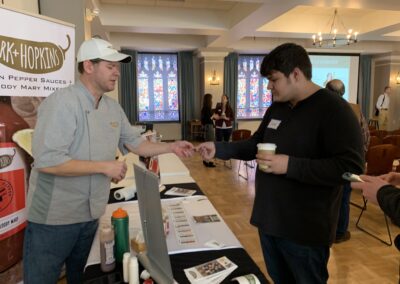 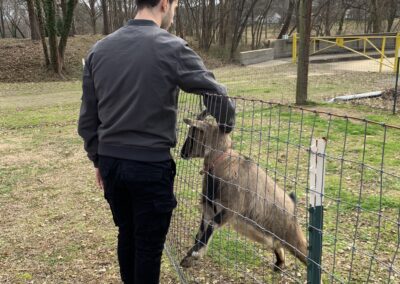 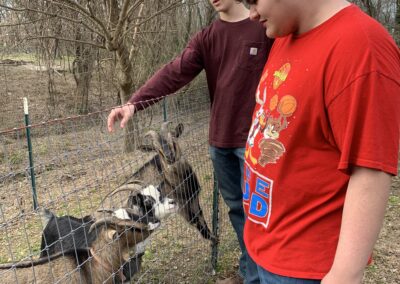 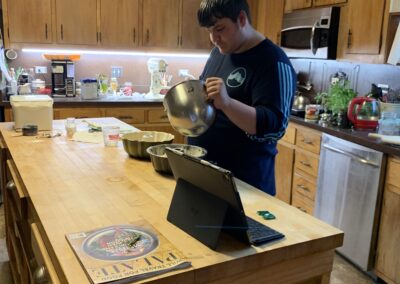 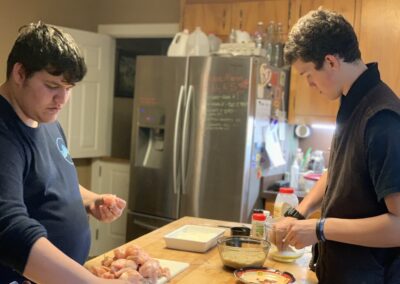 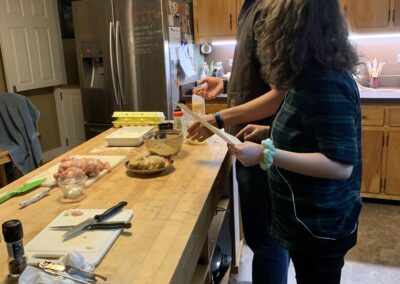 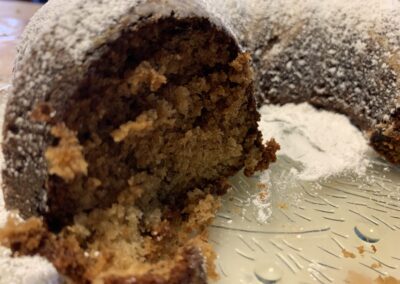 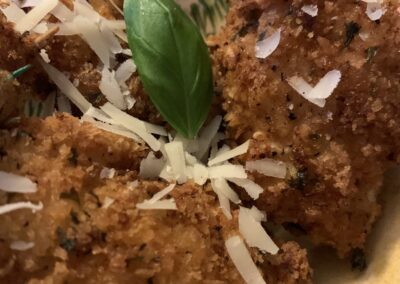 Links to things and places referred to in this article: